DNA evidence is often touted as irrefutable, but problems do exist. It is important to get objective analysis of DNA evidence in order to ensure that no potential issues slip through the cracks. Here are a few examples of problems that may occur.

One of the most commonly-encountered problems is a DNA mixture. If more than one person contributes to a sample, then three or more alleles will likely be observed in at least one of the tested loci. Mixtures are often challenging and are subject to multiple interpretations.

Stutter peaks are found in almost every electropherogram. Stutter peaks are small peaks that occur immediately before or after a real peak. During the PCR amplification process, the polymerase can lose its place when copying a strand of DNA, usually slipping forwards or backwards four base pairs. The result is a small number of DNA fragment copies that are either one repeat larger or smaller than the true fragment being amplified.

Peak height imbalances are calculated in heterozygous loci (containing two alleles). A peak height imbalance is generally considered to occur when there is greater than a 30% difference in the heights of the two peaks. A sample from a single person should contain peaks that are roughly equivalent in height, so an imbalance is indicative of a mixture.

During the testing process, excess dye can clump together and result in a dye blob appearing on the electropherogram output. Although dye blobs can be observed at many heights, most tend to exhibit a wide shape. The danger of dye blobs is that they can mask a true allele.

Noise is present in all samples and constitutes the small peaks along the baseline. Sometimes noise can be a problem if it is too large. Air bubbles, urea crystals, and sample contamination are among the possible causes of large peaks that may mask contributions made by other contributors or may be mistaken as contributions made by a victim or suspect. 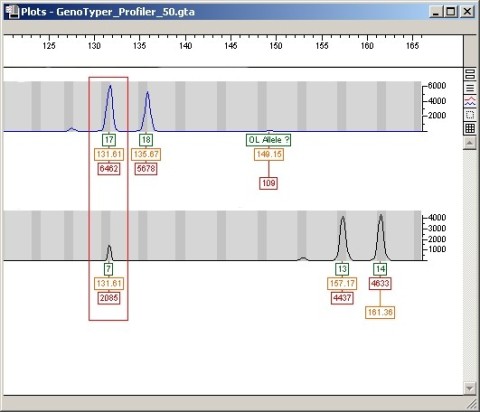 Pull-up (sometimes called bleed-through) is a failure of the analysis software to discriminate between the different dye colors used during the generation of test results. A peak observed in one dye (such as Blue) is recorded by sensor for another dye (such as Green or Yellow) and generates a second peak that is a technical artifact. The artifact peak can of substantial height to be considered a true allele. There is a danger that pull-up will go unrecognized, particularly when the result it produces is consistent with what the analyst expected or wanted to find.

Spikes are technical artifact peaks caused by voltage spikes during analysis. Spikes typically exhibit an unusually thin peak shape. As with all technical artifacts, the danger is that the peak will go unnoticed and will potentially impact the DNA testing results.

We are working on developing an equation to identify spikes, but we can currently determine problems with the power levels by looking at the EPT data generated by GeneScan. The following is an example of clean EPT data. All of the levels are constant. 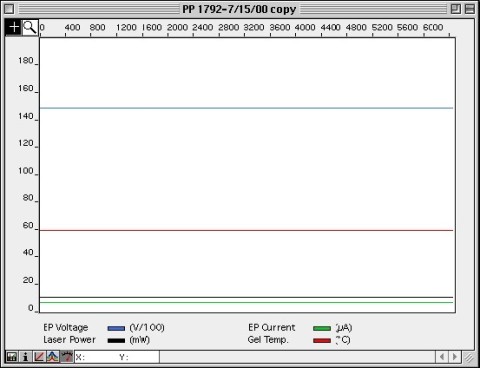 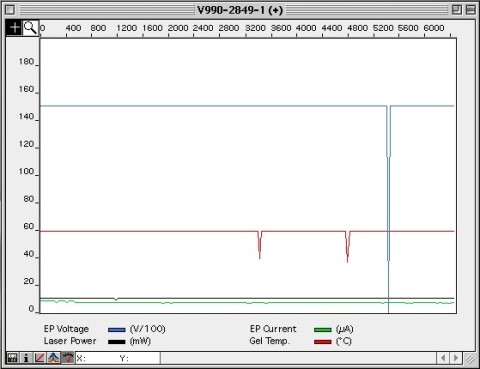 A good indication of general analysis failure is to look at the raw data from the genetic analyzer. It should contain a large band followed by peaks that look similar to a GenoTyper output graph. The baseline should be constant. 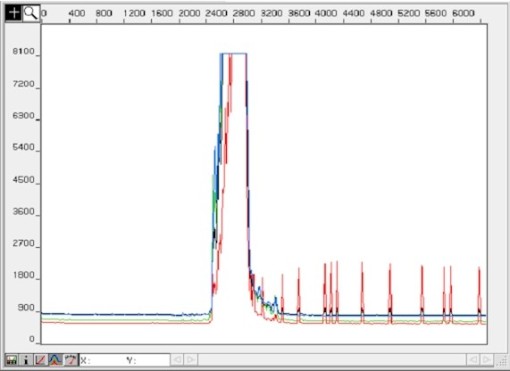 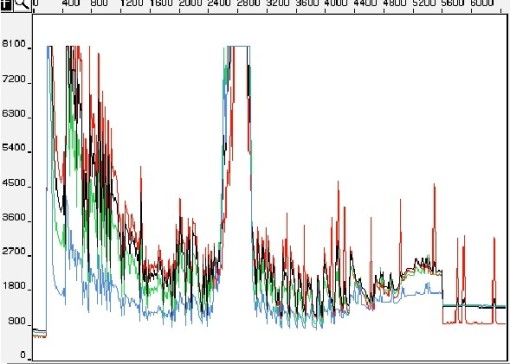